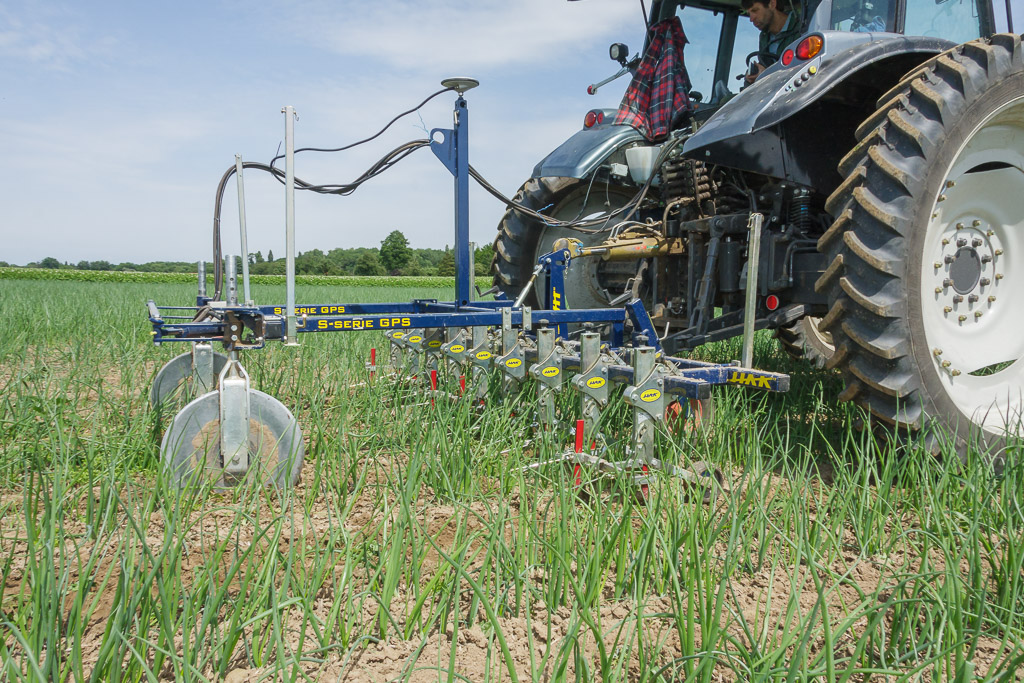 Steering systems GPS
HAK offers ex work GPS steering discs for your new hoeing machine. Your GPS supplier will connect you to the GPS system. Ordering only a mounting frame is among the possibilities. 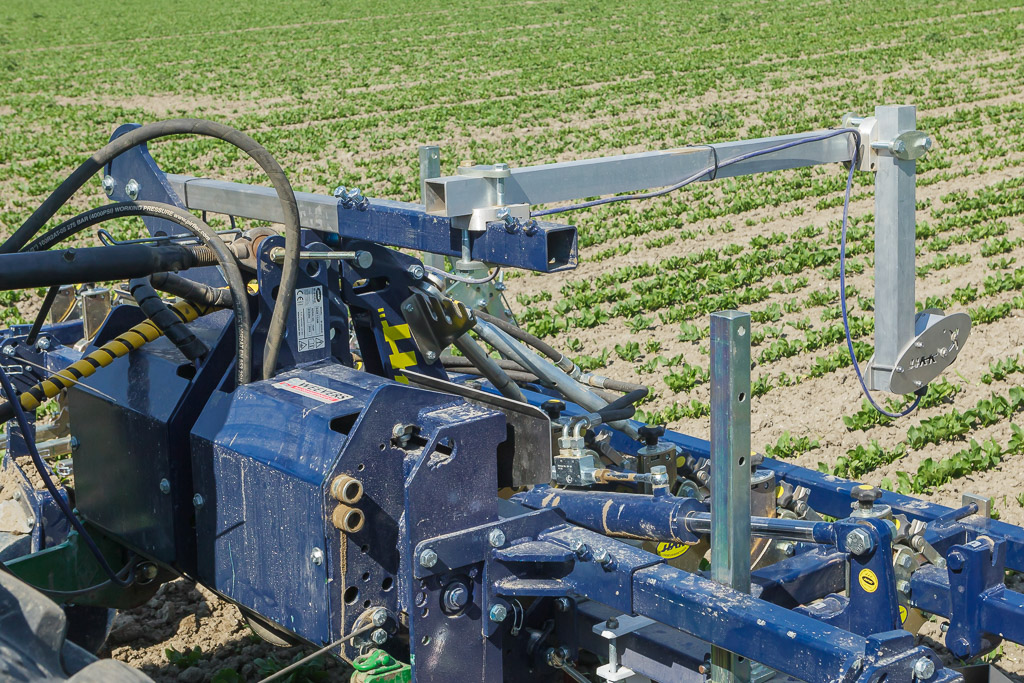 Camera control
We have developed our own camera control system at HAK. The combination of an HD camera with a side shift in the front linkage or three-point linkage makes hoeing possible to the centimeter. The hoeing speed can also be increased. There is no need for a second man and more accurate and longer hoeing can be done because the driver is under considerably less strain during hoeing. More > 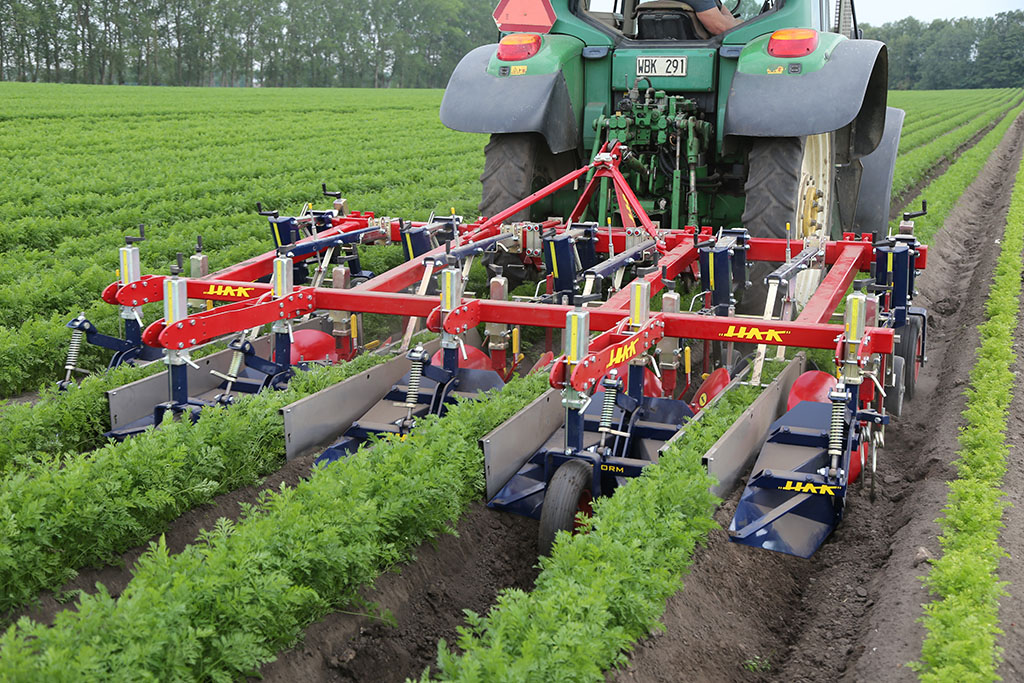 Leaf protector
The leaf protector can be attached to hoeing frames in various sizes. It prevents damaging the crops and prevents the soil from clogging up. The discs are fitted with double sealed bearings and are easily adjustable in width, obliquity, depth and length.

Crust breaker
The crust breaker was developed in 1970 by HAK. From then on the product has been further developed and improved into a solid product. The crust breakers can be used to effortlessly break through hard surface, caused by weather influences. This allows the crops to germinate properly, which is essential considering the growing (quality) demands of the end-users. The working pressure is controlled by a spring and fully adjustable by means of a weight. The roll and the hinge are fitted with sealed bearings.

Row harrow
The HAK row harrows break up the soil around the roots of crops after they have been cut by a HAK hoe, rapidly drying out the weed. Small germinating weed will also be reached, delaying its growth. It will also terminate weed on the ridge in an early stage of germination. The HAK row harrow is supplied with teeth that are adjustable in width and the pressure can be adjusted by means of a weight. The row harrow is available in various editions and attachments, depending on the application and the row distance.

Rotational support side wheels
The HAK support side wheel keeps the hoeing machine stabile on the appropriate working height. The wheel is adjustable in height by moving the hinge rings. The wheel of 400 by 100 millimetres is attached in a solid fork. The attachment beam can be installed to hoeing frames of various sizes.

Adjustable support wheel
These support wheels are fitted with spindle adjustments in order to easily and quickly adjust the height of the frame, which is demanded when increasing the pressure on the surface. The spindles are supplied with graduation, which represents the available height under the frame. The blocking bolt can be operated manually and also results in aberration free height adjustment during use. The wheel size is 4.80 centimetres. 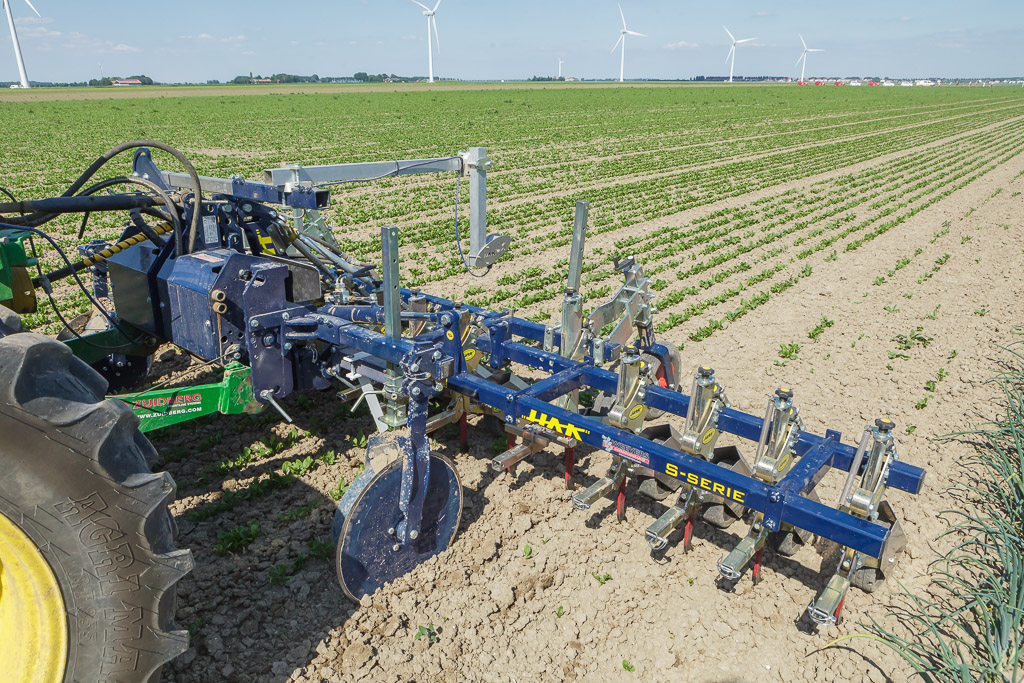 Steering disc 60SG
By using steering discs, the machine becomes stabile and follows the rows more accurately, even on sloping surfaces. Steering errors will therefore not directly influence the machine. Both the discs, as well as the hinges, are fitted with sealed bearings. The disc is adjustable and secured with a spring which pulls up the disc whenever rocks are present in the surface. Machines that are up to three metres wide can be fitted with one disc. When using wider machines or in case of strong sloping, a second disc can be added to offer more stability.

Torsion weeder
The HAK torsion weeder has especially been developed for the removal of weed in the row. In case of relatively small crops, the teeth can be set further apart. The surface in the row breaks open and makes it possible to control small weed. In case of larger crops, the teeth can be set closer together. Because of the travelling speed and resistance of the surface, the teeth will deviate sufficiently in order to prevent damage to the crops and to uproot the weeds properly. The HAK torsion weeder is characterised by two adjustable teeth. These teeth assure optimal result in just one process. The torsion weeder is available in various models.

Finger weeder
The finger weeder that has been developed by HAK is especially suitable for removing weeds in the row and is applicable to various types of crops. The finger weeder’s teeth can be set further apart in case of small crops, thereby breaking the soil open and resulting in proper development of the crops. The weeders teeth can be set closer together in case of bigger e.i. stronger crops. Because of the traveling speed, the uprooted weeds will be tossed from the row. When installing an additional HAK torsion weeder, it is important to remember to install the torsion weeder in front of the finger weeder, because they ridge in the opposite direction. The major advantage of installing a torsion weeder as an addition to the finger weeder is that an optimal result is obtained within a single working process.